I often post my newest recipes or the things I am most recently excited about here and forget that some of my easiest and humblest recipes might also be useful to many of you, as my youngest sister reminds me. Perhaps one dinner in an entire week is planned more than 4 hours ahead of time with most conceived 20 minutes before we sit down and eat them. This is the give and take of a busy family who nonetheless wants to stay healthy and thrifty by not caving and going out to eat all the time. (And forgive me, but although it is cheap and a 5 minute drive from our house, I am on an In N’ Out hiatus for at least another three months…or maybe years.) 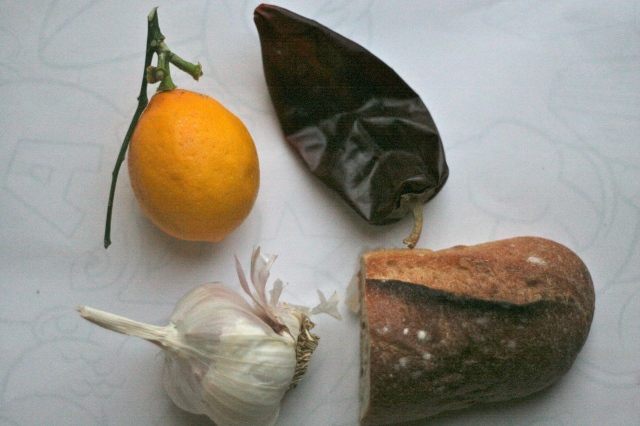 Along those lines, In N’ Out hamburgers have joined the list as relics of a bygone era, an era when my five-year old son would still eat meat. This comes as no surprise (I am literally singing, “And then there were none,” to myself) since my husband and I began counting on one hand the meat based foods that he would still eat. For a while we still had a meat-tomato sauce on pasta, meatballs, breakfast sausage, hot dogs, and bacon. 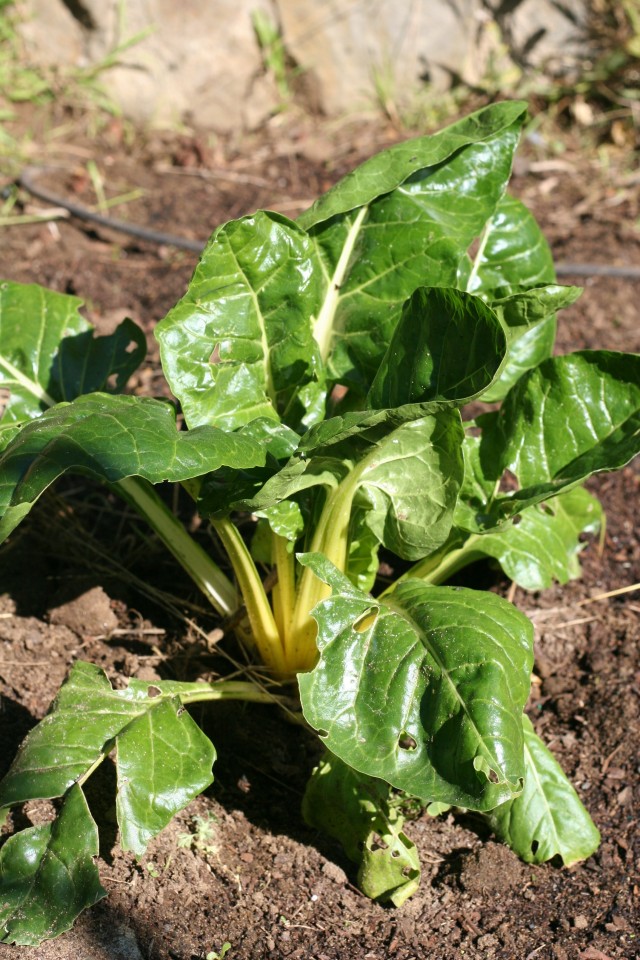 As of two weeks ago he decided that he cannot eat bacon either. What I initially assumed was a texture avoidance for him–as an infant he was repulsed by the pureed chicken I once made, but frankly so was I–turns out to be a moral issue. My discovery occurred several months ago, right before good old “Turkey Day” actually, when an out-of-town friend was staying with us. At dinner, my friend offered my son several meatballs and I heard him decline, stating, “No thanks. I do not like to eat things that came from animals because they have to die.”

My vegetarian "fishing" or "rowing"; he never committed

After school the Wednesday before Thanksgiving, my son fervently grabbed my hands, stared into my soul, and attempted to make me pledge with him not to eat turkey at Thanksgiving so that the bird would not have to lose its life. “Seriously?!” I thought, “You are five!” In November, my little guy was a fresh five-year old and here he was espousing his food ethos…vegetarianism?! Do young children take moral stances against meat?

The silver lining of my son’s “vegetarianism” (and I have purposefully never informed him of this word), is that he is a rare one in his taste for fruits and vegetables. He loves most of the “superfoods” out there–berries, swiss chard, kale, spinach, yogurt, whole grains, beans–and is undaunted in trying new foods, even if it means he gags upon discovering a microscopic piece of shredded chicken in his soup.

Here is a quite balanced vegetarian pasta that is gourmet and easy enough to pull out when it is your turn to cook the romantic dinner, “Inept-but-Earnest-Cook,” and even a five-year old loves….well at least one I know. 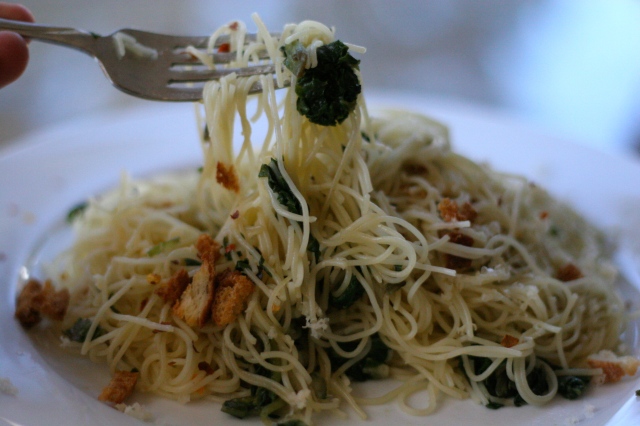 Notes: If you have an old piece of bread on hand or even a package of panko or plain breadcrumbs, I implore you not to skip this five-minute step. It takes the pasta from great to stupendousand unexpected, and will truly stand in for cheese if you elect to make this a vegan pasta. I like the crunchy breadcrumbs and the cheese together.

1 bunch of swiss chard, any color (I have also made this with agretti, kale, and mustards)

1 package of long pasta such as capellini or spaghetti

Set a pot of heavily salted water to boil. First make your garlicky breadcrumbs. Heat 1 tablespoon olive oil in a frying pan with 1 minced clove of garlic and breadcrumbs until golden in appearance. Dump out into a little serving bowl and continue with the same frying pan.

Heat 2-3 tablespoons more of olive oil on medium low. Add the garlic and let cook until translucent, about 2 minutes. Add a crumbled up spicy dried pepper or pepper flakes and zested lemon. I save just a dash of the zested lemon to add again at the end. Meanwhile remove the ribs (the stalk) from the swiss chard. You can chop these up and add them to the garlic for 2 more minutes or only add the leaves.

Add your pasta to the pasta water. Stack the swiss chard leaves on top of each other and roll them like a cigar. Beginning at one end, cut through to make thin ribbons–almost the thickness of your pasta–and add to the garlic and chopped chard stems. Cook until the ribbons just wilt.

Drain the pasta, mix in the frying pan, and add a pinch or two of coarse sea salt and one more little glug of olive oil and toss. Serve with the garlicky breadcrumbs (“poor man’s cheese” ‘formaggio dei poveri’) and grated cheese.